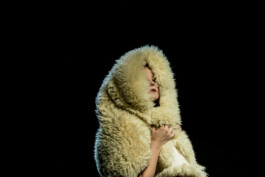 Greta Granderath is a performance maker and writer based in Hamburg, Germany.

Greta’s artistic work explores the interrelation of language, voice and movement and playfully reworks body and gender stereotypes. She is interested in working with affect as well as developing feminist aesthetics and modes of collaboration. Since 2012, she works as a freelance director, dramaturg, performer, writer and producer. She makes dances, one-to one performances, site specific works, writes poetry and experimental texts and invents situations for irritation and exchange.

Greta holds a BA in Theatre Studies and Comparative Literature (Freie Universität Berlin, 2009) and an MA in Performance Studies (University of Hamburg, 2011). After graduating, she worked at the dramaturgy department of Ruhrtriennale festival for six month.

Greta publishes poetry and fiction in magazines, anthologies and on the radio, e.g. at WDR, jahrbuch der lyrik, edit and still. She has been invited to literary festivals such as lit.cologne and poesiefestival berlin and received writing scholarships of Film- und Medienstiftung NRW and the city of Hamburg.

this is my tongue talking to you
performance on the myth of the mermaid
Das Archipel, Hamburg, 2016

She works as an freelance editor for Westdeutscher Rundfunk (WDR), department radio play.

Writing scholarship of the City of Hamburg in Justiniac/France, 2016